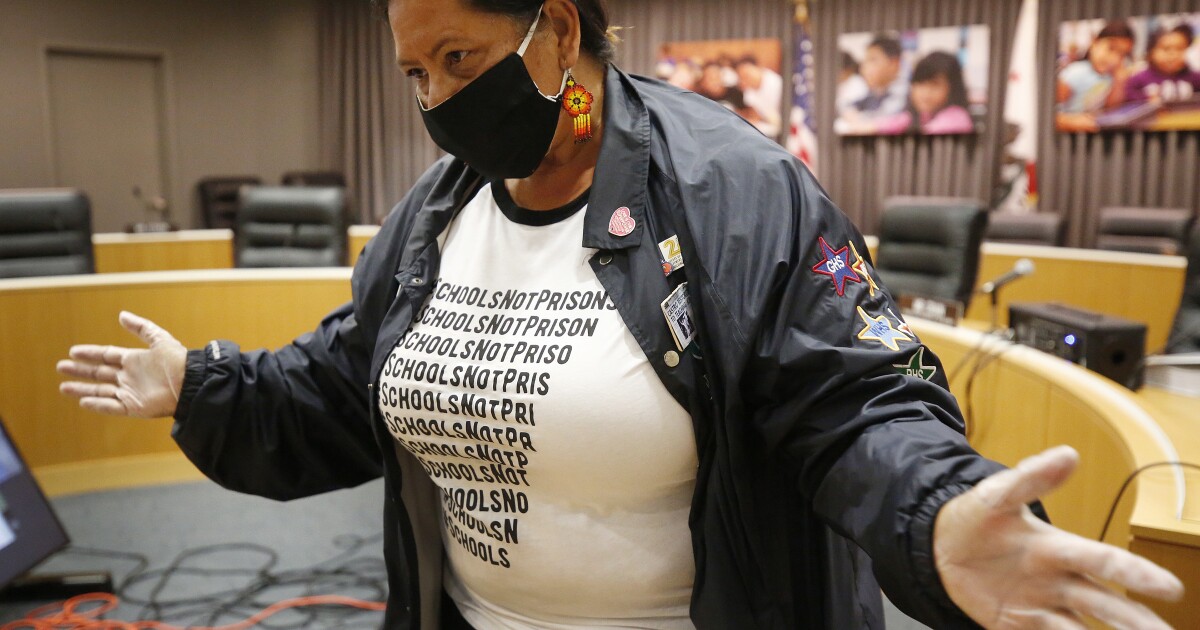 The Los Angeles Board of Education on Tuesday approved an immediate 35% cut to its school police force, a reduction of $25 million, in response to weeks of protests by student activists and community groups who had called for the elimination of the department.

The board action also calls for officers to give up their uniforms and patrol off campus, and will lead to the layoffs of 65 officers in the 471-employee department. The money saved will be allocated to fund staff to specifically serve the needs of Black students and a task force that will study ways to re-imagine the issue of student and campus safety.

“L.A. Unified has to continue to be a leader in showing what can happen when we believe in self-determination, when we empower communities to help this organization transform itself,” said board member Monica Garcia.

Goldberg’s chief of staff, Sharon Delugach, said Tuesday night that the resolution also would require officers to be unarmed and would prohibit the use of pepper spray. However, those provisions were not in the resolution read aloud to the board.

The portion of Garcia’s language that was preserved said the money saved would go to “support African American student achievement to the extent of the law.” And until safety alternatives are worked out, all schools would have access “to appropriate community support in the event of an emergency.”

Just before the vote, Garcia added an amendment that would bar the school district from replacing the school police by contracting with the Los Angeles police, the county sheriff’s department or a private security force.

The vote to reduce the police force came at the end of a 13-hour meeting that started with public comments over the issue, which has roiled the school district since June 8, when leaders of the teacher’s union joined with activists and called for the elimination of the police department.

Several student protests in Los Angeles were part of a nationwide movement calling for the “defunding” of police. Local activists have long opposed the school police, but their effort gained momentum after the death in May of George Floyd in the custody of the Minneapolis police.

L.A. Unified joins several other school systems, including Oakland Unified, that have recently decided to move away from bringing armed officers onto campus, whether they are employed by the district or are part of a municipal police force.

The shape of the final resolution was a compromise between Garcia, who proposed a 50% reduction, and Goldberg, who offered the smaller amount as an alternative and added the provisions about the uniforms and where the officers could be stationed.

Goldberg advanced her compromise after Garcia pressed the issue by bringing it back to the board one week after her earlier defunding effort failed. Speakers against the school police dominated more than five hours of public comments; there also were numerous and passionate defenders of the police.

“There is nothing I can say to move the board that hasn’t been said by passionate advocates,” Garcia said as she began her 11th-hour bid. Board members then debated for hours, just as they had last week.

Goldberg praised the quality of the school police force but said that the students “have made an impact on me.”

She added: “I have been moved to tears since the death of Mr. Floyd.”

Vladovic said it would have made more sense to get parent and student input districtwide rather than to act immediately.

Both he and McKenna talked of violent episodes in their personal experience as principals that justified the need for police. McKenna talked of officers establishing positive relationships with students, often serving as mentors.

In fact, all board members spoke of the district’s police force as a model agency and preferable to relying on the Los Angeles Police Department or the county sheriff’s department.

The groups pushing to eliminate the school police said they would have preferred Garcia’s original 50% cuts but would continue fighting toward the goal of completely eliminating the department.

“This decision is a huge step that the LAUSD School Board is taking to cut the school police department and fund Black futures,” said student organizer and recent Venice High School graduate Mya Edwards.

“The fight for real school safety has only just begun,” said Black Lives Matter L.A. co-founder and L.A. Unified parent Melina Abdullah. “A powerful coalition has formed and will not stop until we rid police from schools and invest in visions of safety that are grounded in meeting student needs.”

Before the vote, school police Chief Todd Chamberlain told the board the cut would result in an immediate reduction of 65 officers and would limit officer presence at high schools to school hours Monday through Friday. In addition, he said, 39 vacancies would not be filled, and there would be no overtime available to fill the gaps. The department has a total of 472 employees, including 344 sworn officers, who are certified to carry weapons.

High schools typically have one assigned, armed officer; middle schools have an unarmed security aide; and elementary schools rely on roving patrols for safety issues. Groups of officers typically arrive quickly at a school when a serious security call is sent out.

Officers also would not be able to provide security for adult and night school, he added. After-hours security would be virtually eliminated, making it difficult to deal with burglaries, vandalism and trespassing. A detective who focused on sex-trafficking prevention would surrender those duties.

Perhaps the most compelling loss, Chamberlain said, is that the department’s intervention and prevention efforts would have to end.

Garcia responded that the task force could have the goal of resolving the issues raised by Chamberlain in different ways.

Vladovic said the cut, in effect, destroys the infrastructure of the police department.

The 19-year-old defender is desperate to play in the final later this month (Picture: Getty)Mikel Arteta has confirmed that Arsenal and Saint-Etienne have...
Read more
Sports

'He is the star of this Arsenal defence': Ashley Cole lavishes...
Read more
News

MARY Kay Letourneau, the former teacher who was convicted of raping her then-12-year-old student and then marrying him years later, has died, according...
Read more
News

The 19-year-old defender is desperate to play in the final later this month (Picture: Getty)Mikel Arteta has confirmed that Arsenal and Saint-Etienne have...
Read more
News

MARY Kay Letourneau, the former teacher who was convicted of raping her then-12-year-old student and then marrying him years later, has died, according...
Read more
News

A Melbourne teenager on holiday with his family in Merimbula, south-east New South Wales has tested positive for coronavirus - as Premier Gladys Berejiklian...
Read more
News

Will fans be allowed at Rockies games at Coors Field?

The Colorado Department of Public Health and Environment is reviewing a plan from the Colorado Rockies to host fans at Coors Field. ...
Read more
News

How to tackle growing pandemic of rape

CONTINUE FROM LAST WEEKTHE individual complaint mechanism is designed so that an individual woman, or a group of women, who feel that her/their...
Read more

PIERS MORGAN: Confronting inequality is uncomfortable – but so is watching Harry lecturing the world

I've seen less disconcerting hostage videos.That was my thought this morning as I watched Prince Harry staring blankly into a camera and lecturing...
Read more
OP-ED

CORONATION Street's Joe Duttine has said that Tim is "in denial" about his evil dad Geoff Metcalfe as Yasmeen's trial looms. His Weatherfield character...
Read more

The 19-year-old defender is desperate to play in the final later this month (Picture: Getty)Mikel Arteta has confirmed that Arsenal and Saint-Etienne have...
Read more
Sports

'He is the star of this Arsenal defence': Ashley Cole lavishes...
Read more