Sir Tom Jones, will.i.am, Olly Murs and new girl Anne-Marie reveal how they got their voice back

Every so often, when they’re casting for a new member of the judging panel, the producers of The Voice have a chat with Sir Tom Jones about which of his showbiz mates he could see in the role. They often have performers of his vintage in mind, but he puts them straight.

‘Sometimes they say something like, ‘Don’t you think Gladys Knight would be good?’ I know Gladys. She would be great. But I have to say, ‘Excuse me, there’s only room for one oldie here. That’s my spot.’

So the new signing for the latest series of the chair-swivelling talent show is still in her 20s. Actually, there’s some confusion today about how old Essex-born singer and songwriter Anne-Marie is. 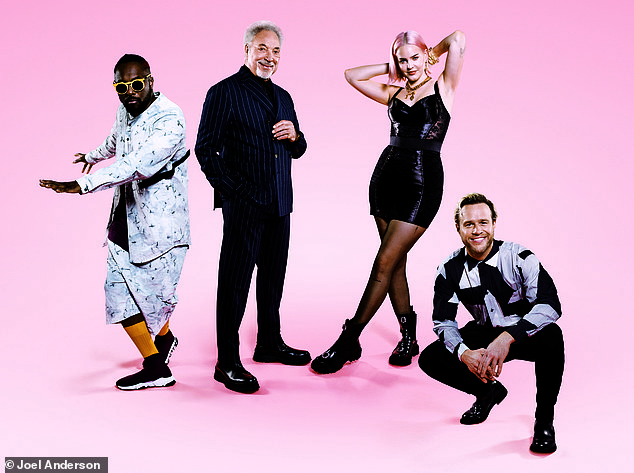 Anne-Marie (her surname is Nicolson although she never uses it) has pink hair and an army of teenage fans thanks to a string of hits such as Rockabye, Friends and 2002. She may have been in the business since she was tiny (she attended stage school and was in a West End production of Les Misérables as a child), but she admits she was quaking in her shoes at the idea of singing with Sir Tom (The Voice usually opens with a big ensemble number from the coaches).

‘I was thinking, ‘Oh God, he’s going to find my voice so boring compared to Aretha Franklin’s,’ she says. ‘We had a chat about it actually, and he said nothing could be further from the truth.

‘I was convinced he’d just find so much of today’s music boring, and he reminded me that there was plenty of boring music around when he was younger too. It’s just that the good stuff is the stuff that has lasted.’

The new signing does mean that the collective coaching panel (they get miffed at being called judges) this year spans the showbiz ages. While Anne-Marie and Olly are in their 20s and 30s, will.i.am is 45 and Sir Tom is a venerable 80.

When we catch up with all four on Zoom today to talk about the new series, age is pertinent. Filming of the last series had to be halted in March due to Covid, returning in November for the semi-final and final, and filming those and the new series has been nothing short of a logistical nightmare.

‘We all hug all the time, but now we can’t’
Sir Tom Jones

How to make a studio-based talent show without the vital studio audience? How to keep the established talent safe? Did the whole thing turn into a how-to-wrap-Sir-Tom-in-cotton-wool challenge? It sounds very much like it did.

‘Well, Sir Tom was the priority,’ admits Olly Murs.  ‘There was a moment where we all wondered if he’d come back. If he hadn’t, I don’t think it could have gone ahead. You couldn’t have the show without Tom.’ On set, this meant masks all round, and no one standing too close.

Olly paints a rather hilarious picture of him backing up every time Sir Tom took a step in his direction. ‘You do forget and Tom would inch closer and I’d say, ‘Whoooah! Back…’ 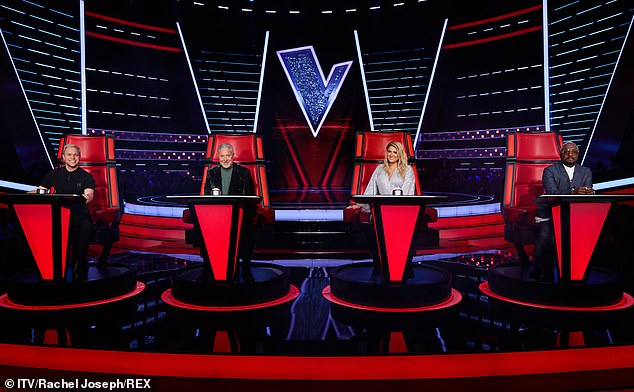 There is much talk today about how they’re a team – a TV ‘family’ – but will.i.am is the one to say it: the other three are support acts. ‘Sir Tom is the headline act. Like at a festival, we open for him, but he’s the headline.’

Anne-Marie certainly knows her place in the Covid-safety pecking order. ‘It’s Sir Tom at the top. I’m at the bottom,’ she says. Interestingly, it’s the octogenarian who seems most oblivious about his own age. ‘It’s a strange thing to be 80 years old and not feel it,’ he says.

‘If there was any cotton-woolling going on, I think other people were more aware of it than I was.’ Truth be told, the person who finds it scariest that Sir Tom is 80 is the man himself. 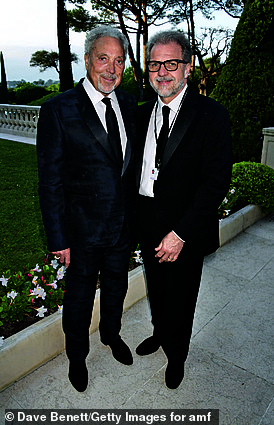 Sir Tom Jones was supposed to have a party for his big 8-0 in June, but Covid scuppered that. There was a celebration of sorts though in The Voice studio, when will.i.am arranged for a special video message from Tom’s old mate Stevie Wonder.

But Olly Murs bemoans the fact they couldn’t have fizz and cake. On the day itself he did send Tom a bottle of Champagne, and he wasn’t alone.

So how did he spend his birthday? ‘I was at my flat in London with my son Mark, my daughter-in-law and my grandchildren. And I got drunk.’ Thank goodness!

This year has been topsy-turvy enough. The idea of Sir Tom celebrating with camomile tea is horrific.

‘I don’t drink as much as I used to but on my birthday, and at Christmas, I do have a few. Only a few, mind. The older you get, the worse the hangover.

‘They’re so much heavier, and you can’t shake them off like when you were young. I can’t deal with booze the way I used to.’

‘Let me tell you something. When I go to the bathroom at night I won’t switch on the light, or I catch sight of this man in the mirror and I think, ‘Who is that old fellow?’ The fact that he returned to work during the pandemic speaks volumes. It sounds as if he was delighted to get back to some sort of a stage – even if there was only a virtual audience.

‘They were watching us, but we were watching them back,’ says Sir Tom, explaining how a big screen in the studio showed ranks of faces of people at home in their living rooms. Still, when you’re a performer, any platform is a platform.

‘I’d normally be doing shows during the year as well, but obviously all that was cancelled, so the way I feel about it is that at least with this show we can get on and still make music,’ he says.

‘Lots of musicians have just lost their livelihoods. The crew, the sound engineers, the roadies. People are struggling. But for The Voice to be on TV, it means that the lighting people and camera crews are working. And the contestants.

‘People still have dreams they want to see fulfilled. It’s a beautiful thing that music is on TV.’ No hugs though, and hugs are very showbizzy.

‘We all hug all the time,’ admits Sir Tom. ‘That was weird. When someone does well, you want to give them a squeeze. You can’t.’ Series ten is going to be an interesting watch then.

There’s a new element, introduced to increase the tension by all accounts. For the first time the four coaches will be able to block each other from staking a claim on a contestant.

Since they’ve already filmed the early stages, did anyone dare to block Sir Tom? will.i.am says he’s untouchable in that sense too, although it seems cheeky Olly did dare. ‘But only because I blocked him first,’ says Tom.

All four are on good form today, holed up in their homes. They’ve had very different lockdowns. Resident eccentric will.i.am admits he adapted well, recording an album with his band Black Eyed Peas.

‘I’ve taken a liking to staying in a place for two weeks, not able to leave. It gives me the ability to focus on the project I want to, to the point where it doesn’t feel like two weeks. I don’t think of it as a lockdown. It’s a project.’

Sir Tom looks impressed, but slightly baffled. He had moved from his home in LA to London pre-pandemic. ‘And thank goodness for that, I could see my family,’ he says, telling how he’s been enjoying walking with his granddaughter.

‘I live on the Thames, you see, so there have been lots of walks, which has been great. Normally I’d be away, so I’ve loved having that time with family.’ Other than that, he’s been singing (to himself) and pottering about on the guitar.

‘I play a little, but not well. I should have improved more, really.’ He chides himself for having a piano at home but still being unable to do more than pick out a few chords.

‘I should learn, but I’m fundamentally lazy. Singing always came naturally. I didn’t have to work at it.’ You sense a great protectiveness towards Sir Tom among the others.

Olly points out that, having lost his wife in 2016, Tom has needed his TV family more than ever. ‘We are family to him, really,’ he says. Maybe he’s getting carried away here, but that’s very Olly.

He’s still the eager puppy of the operation, although he insists he’s mellowed. His lockdown has been nothing short of life-changing, he reveals.

He and his girlfriend, bodybuilder Amelia Tank, had been talking about moving in together pre-pandemic, but when lockdown started they brought their plans forward.

‘It’s the first time I’ve lived with anyone,’ he admits, a little sheepishly. ‘But it’s been brilliant. I’m really in love, actually. I’d been single since 2016, and the past four years had just been about dating, meeting people, having a very bachelor life really.

‘But meeting Amelia changed it all. It was time, too. Time to be tamed! I’m putting down foundations now, and I’m really happy.’

They met at the gym, and she has been responsible for encouraging his lockdown weight loss (‘I look at pictures of myself from last Christmas and I just cringe’) but living together during the pandemic was a gamble, surely?

‘I know, but luckily we had decided before it started, otherwise it would have felt a bit forced. It was just the time-scale that changed.’

He and Amelia even got a dog in lockdown, so the march towards being a family man has started, perhaps. ‘The next step is taking the dog to meet everyone on The Voice. We haven’t been able to do that because of the restrictions, but we will.’

Back to Anne-Marie. Joining the team during the pandemic must have been difficult (the Covid crisis led to her predecessor Meghan Trainor having to quit because her pregnancy meant travel between the US and the UK was impossible). She seems quite a tough cookie though.

She’s a former childhood karate champion, which might sound like an odd qualification for showbiz, but she insists it has helped in her music career. ‘I don’t think I’d be here without my karate,’ she says.

‘It teaches you discipline, and about getting up again if you don’t win.’ So many survival tips, then, in a year that has required them. As Sir Tom says, the fact that they’re all still standing to take the show into a tenth series should be celebrated. ‘We’re still breathing,’ he says.

‘My father, God bless him, was a coal miner and he used to say, ‘As long as I’m breathing…’ You can deal with the other things as long as you’re alive.’

The Voice UK returns Saturday at 8.30pm on ITV. 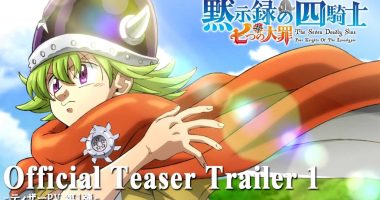 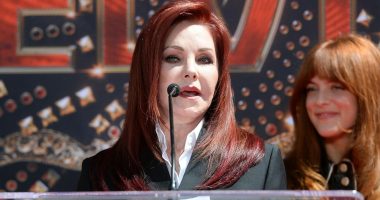 Priscilla Presley is adapting to her new normal following her daughter’s burial.… 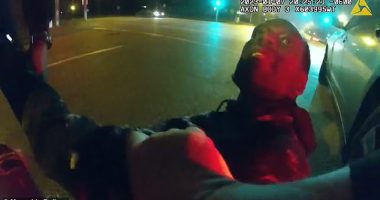