Victoria has slammed shut its border with New South Wales, after thousands of residents rushed back to the southerly state to avoid hotel quarantine.

Acting Premier Jacinta Allan on New Year’s Eve announced the hard border would come into effect from 11.59pm on January 1 as NSW continues to battle a Covid-19 outbreak.

Motorists raced to the border following the announcement, with many ringing in the New Year in lengthy queues.

But some unlucky travellers were turned away from border checkpoints minutes after the clock struct 12 on Saturday. 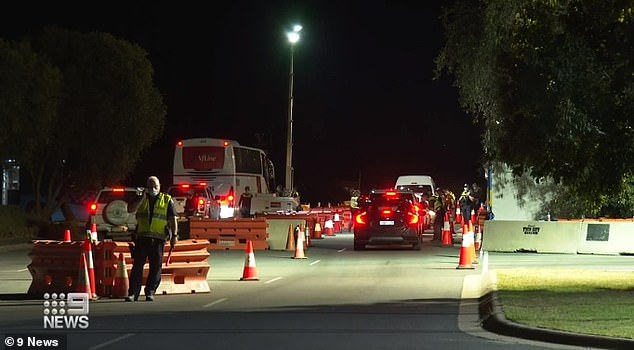 Victoria slammed shut its border with NSW at 11.59pm on Friday January 1 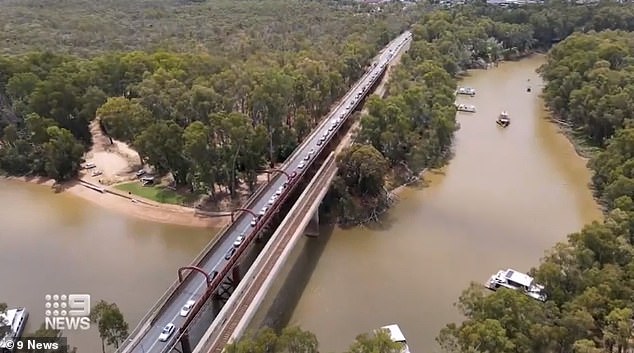 Motorists raced to the border following the on December 31, with many ringing in the New Year in lengthy queues (pictured)

Kelli Rippon and Rachel Bartlett were the lucky last vehicle to cross the Hume Freeway checkpoint before the border closure, news.com.au reported.

The pair had driven from Brisbane to Dubbo, before entering Victoria.

The hard border brings to an end a confusing progression of lesser border restrictions Victoria had been making since the lead-up to Christmas.

Those who crossed back on Friday were required to have a border permit. They must now isolate at home for 14 days.

‘We need to close the border, because we do not wish to continue to import high-risk Covid cases back into Victoria,’ he said. 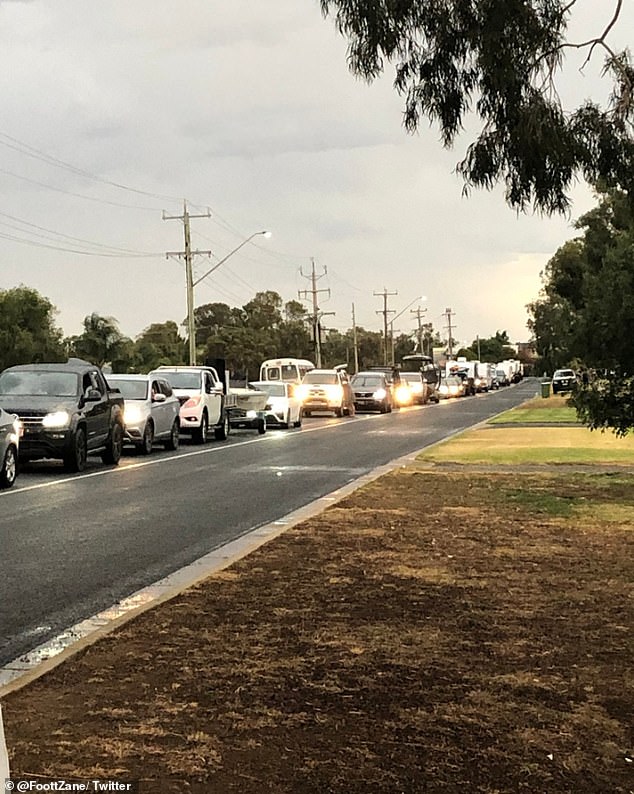 A Twitter user shared this picture and wrote: “We’re 3.5 kilometres off the border at Mulwala” 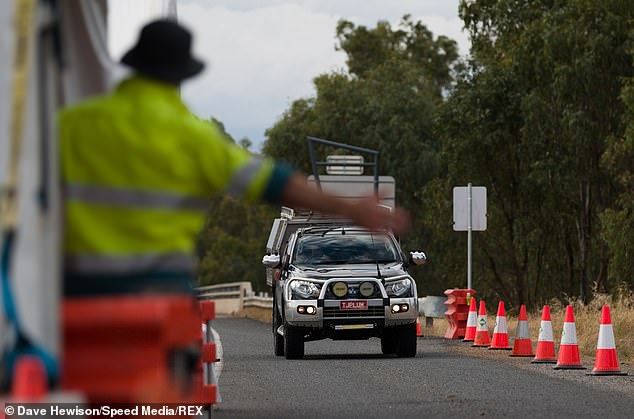 ‘We do not think that would be right or fair for the Victorian community.

‘We do not have the capacity to put hundreds of people into hotel quarantine because they elected to come home late.

The coronavirus outbreak in Sydney seemingly jumped the border after a returned NSW traveller dined at a Thai restaurant in Melbourne.

The latest cases of community transmission in Victoria are two people linked to a bayside Thai restaurant who then travelled to NSW.

The Victorian government sent out a statement on Friday saying the pair attended the Buffalo Smile Thai restaurant on December 21.

They travelled to Lakes Entrance a week later on December 28 and 29, then went on to Bega and Bermagui in NSW. 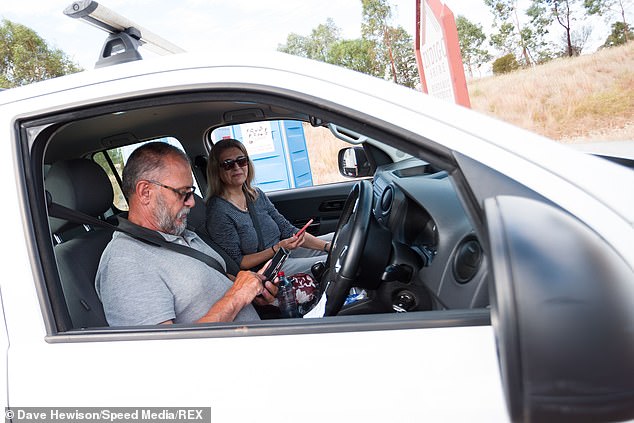 Neil and Ornella from Melbourne have been visiting their daughter in Bellina, NSW after being separated for a year due to coronavirus. With almost no notice they have been forced to leave early and return home to Victoria

Victorian public health authorities contacted them on December 31, where they were already in a NSW COVID-19 testing line, a spokeswoman said. The pair is now isolating in Victoria.

Apart from these two cases revealed on Friday, another eight Victorian cases are linked to the Black Rock restaurant.

The ACT has also moved to tighten its border with NSW.

Anyone travelling to the ACT from a Covid-19 hotspot in NSW will now require an exemption.

People from Sydney’s Northern Beaches, Greater Sydney, the Central Coast and Wollongong will not be legally permitted to enter the ACT without a valid pass.

The updated health direction will come into effect from midday on Saturday and any non-compliance will result in penalties, the ACT government says. 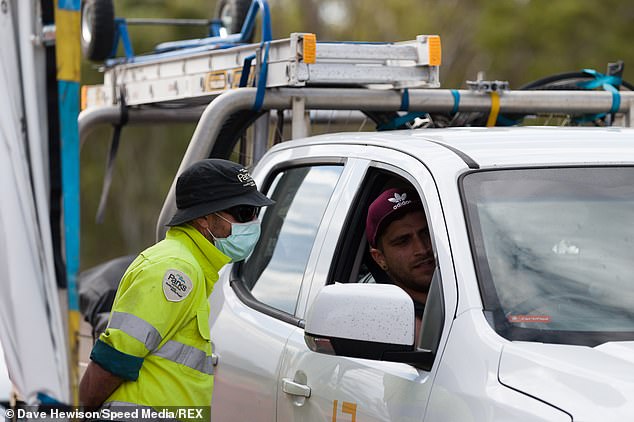 It comes after NSW on Friday reported three new coronavirus community transmissions, all in western Sydney.

Any travellers from these regions into the ACT for ‘extraordinary circumstances’ are required to apply for an exemption at least three days prior to the planned entry but no more than 14 days ahead of time.

These changes do not affect current restrictions for ACT residents returning from Covid-19-declared areas, whereby until at least January 6 authorities must be notified followed by a mandatory quarantine for 14 days. 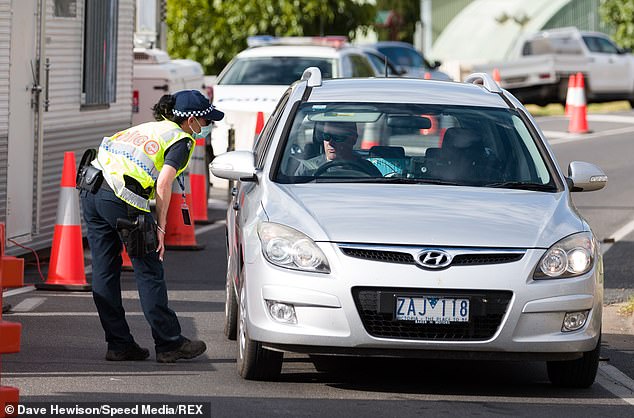 Jeroen Weimar, the Victorian Health Department’s COVID-19 response commander, defended the border closure on Friday. ‘We need to close the border, because we do not wish to continue to import high-risk Covid cases back into Victoria,’ he said. Pictured: Border checkpoint at Wahgunyah

‘In recent days we have continued to see around 80 non-ACT residents from COVID-19 affected areas of NSW travel to the ACT daily,’ Dr Coleman said in a statement on Saturday.

‘As a result we now have around 2000 people in quarantine in the ACT, 25 per cent of which are non-ACT residents.’

‘For those in COVID-19 affected areas of NSW, we ask that you respect the public health direction that has been put in place and do not travel to the ACT.’

Canberrans have also been reminded not to travel to Greater Sydney, or any other COVID-19 affected areas, and to reconsider travel to NSW more broadly.

Police officers will patrol the Federal Highway to enforce the new rules. 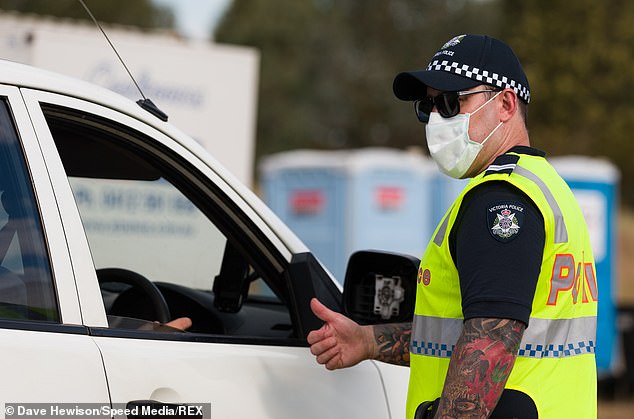 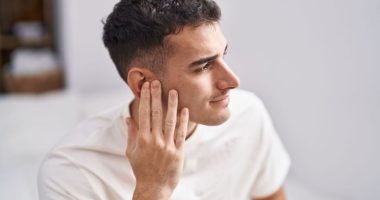 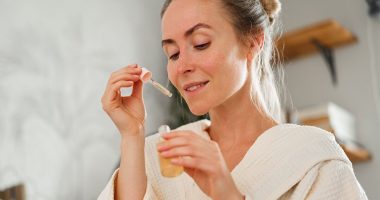 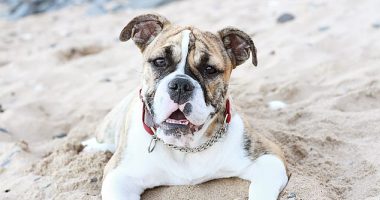 Number of puppies being abandoned has soared by 73% since Covid lockdown,… 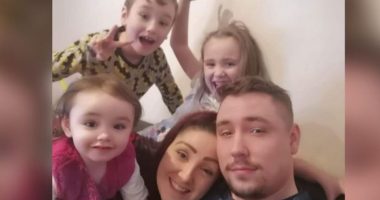