The sluggish and at times chaotic rollout of COVID-19 vaccines across the country continues to draw strong criticism, particularly from Democrats, as new data reveals just a quarter of the shots distributed to states have been administered, even as Dr. Anthony Fauci warns that it is ‘possible’ the jabs could be required for school or travel.

As of New Year’s Day, 3.17 million doses of the Pfizer and Moderna vaccines have been administered. That is just 25 percent of the total number of doses that have been delivered to states, according to an analysis of the data from Bloomberg.

President-elect Joe Biden took a swipe at the Trump administration’s oversight in a tweet on Friday, writing: ‘Let me be clear: The Biden-Harris Administration will spare no effort to make sure people are getting vaccinated.’

Biden has vowed to invoke the Defense Production Act and ensure that 100 million vaccines are administered in his first 100 days in office, though he has offered few concrete details on how this would be achieved.

Even as the slow rollout leaves most people without any opportunity to get the vaccine for now, Dr. Anthony Fauci says it’s ‘quite possible’ that COVID-19 vaccines will become mandatory to attend school or travel outside the country. 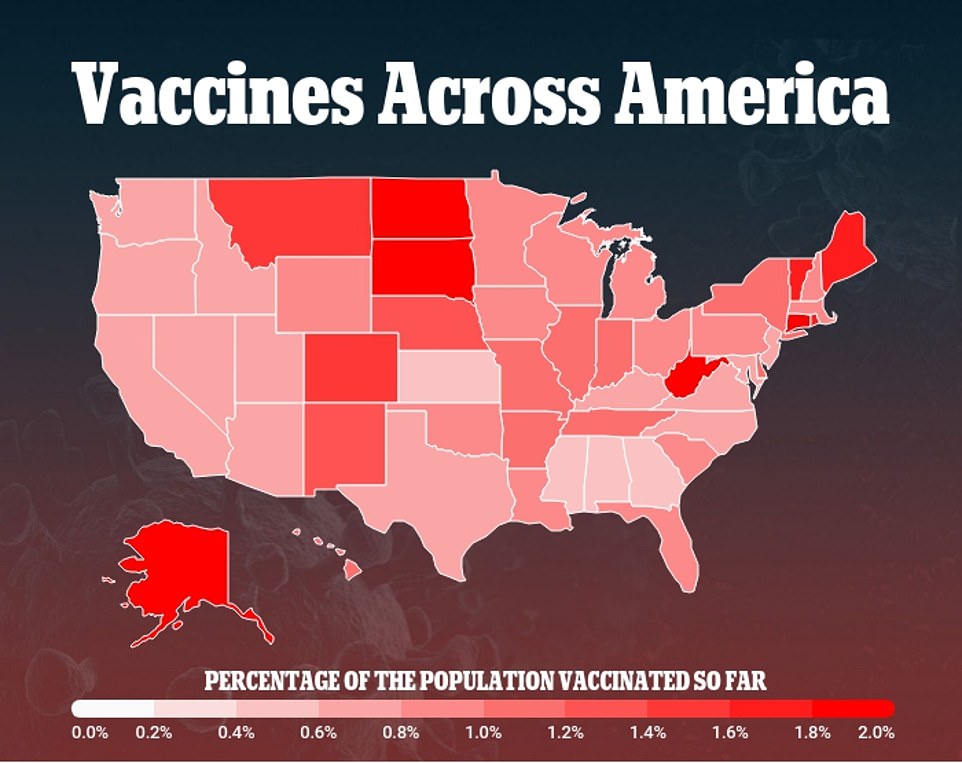 West Virginia has vaccinated the highest percentage of its population, followed by South Dakota and North Dakota. Kansas lags the farthest behind in population vaccinated, with just 0.42% of all residents having received the jab

‘A citywide school system might require it in some cities but not other cities. And that’s what I mean by things not being done centrally but locally,’ he said.

Asked if the U.S. government could issue a ‘vaccine passport’ to authorize travel abroad, as Israel has done, Fauci responded: ‘Anything is on the table. Anything is possible, of course.’

Meanwhile, Florida’s agriculture commissioner this week called on Governor Ron DeSantis to deploy the National Guard to assist the vaccination campaign, saying in a letter to the Republican governor that the effort had been ‘very chaotic’ so far.

Agriculture Commissioner Nikki Fried, Florida’s only statewide elected Democrat, said in the letter on Wednesday that there is a lack of ‘clear direction’ on vaccination procedures for healthcare workers.

‘Instead of efficient, centralized distribution management by the state of Florida, distribution has been left to hospitals and county health departments,’ Fried wrote. ‘While you characterize this as ‘cutting out the middle man,’ vulnerable residents are left without answers or clear direction from overwhelmed local agencies on when, where and how to receive the vaccine.’

The state’s Republican party hit back in a statement, saying: ‘It’s nice to see that Commissioner Nikki Fried is taking time out of her vacation to send out an ill-informed, irresponsible letter on social media that prioritizes politics over helping Floridians who are interested in the vaccine.’ 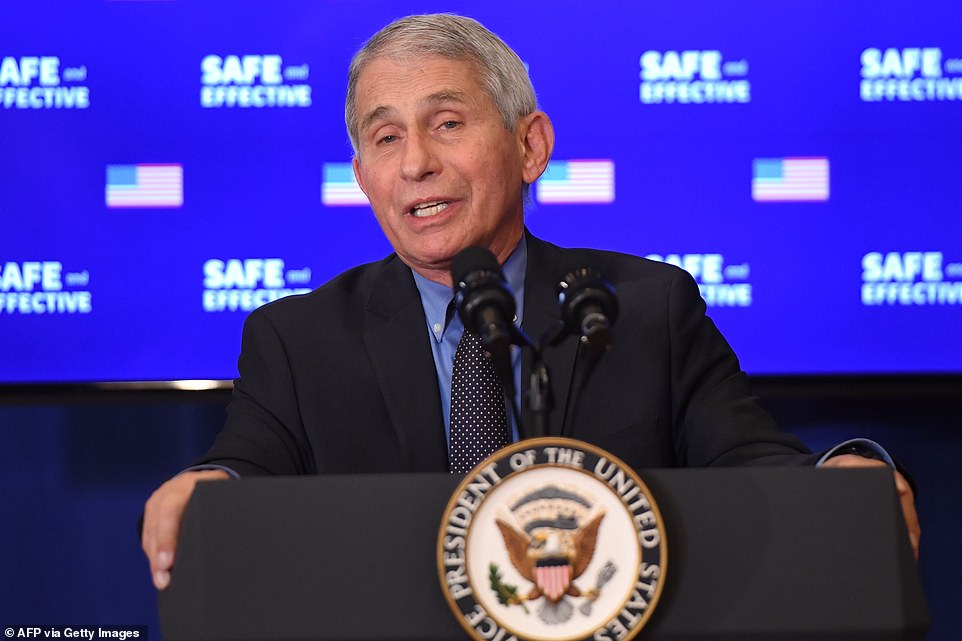 Even as the slow rollout leaves most people without any opportunity to get the vaccine for now, Dr. Anthony Fauci says it’s ‘quite possible’ that COVID-19 vaccines will become mandatory to attend school or travel outside the country

The state, which opened up vaccination to anyone over the age of 65 on a first-come, first-served basis, has witnessed chaotic scenes, with elderly residents brawling outside of pharmacies over line cutting, and bundling up to wait overnight for the shots.

The National Guard is currently being used by governors in at least 26 states to assist in COVID-19 vaccine distribution in some capacity, according to a spokesman for the National Guard Bureau.

It’s unclear whether any state is using medically trained guardsmen to administer the jabs. Most are relying on the Guard for shipping and logistics help.

According to the new data, Maine is now leading the way in efficiency in administering the vaccine. The Pine Tree state has administered 51.1 percent of the doses that the state has received, a higher ratio than any other state, according to Bloomberg.

Washington DC, South Dakota, Connecticut and Montana follow Maine as the next most efficient states.

West Virginia, which is among the states utilizing the National Guard in vaccine rollout, has vaccinated the highest percentage of its total population, with 2.5 percent of all residents having received a shot. 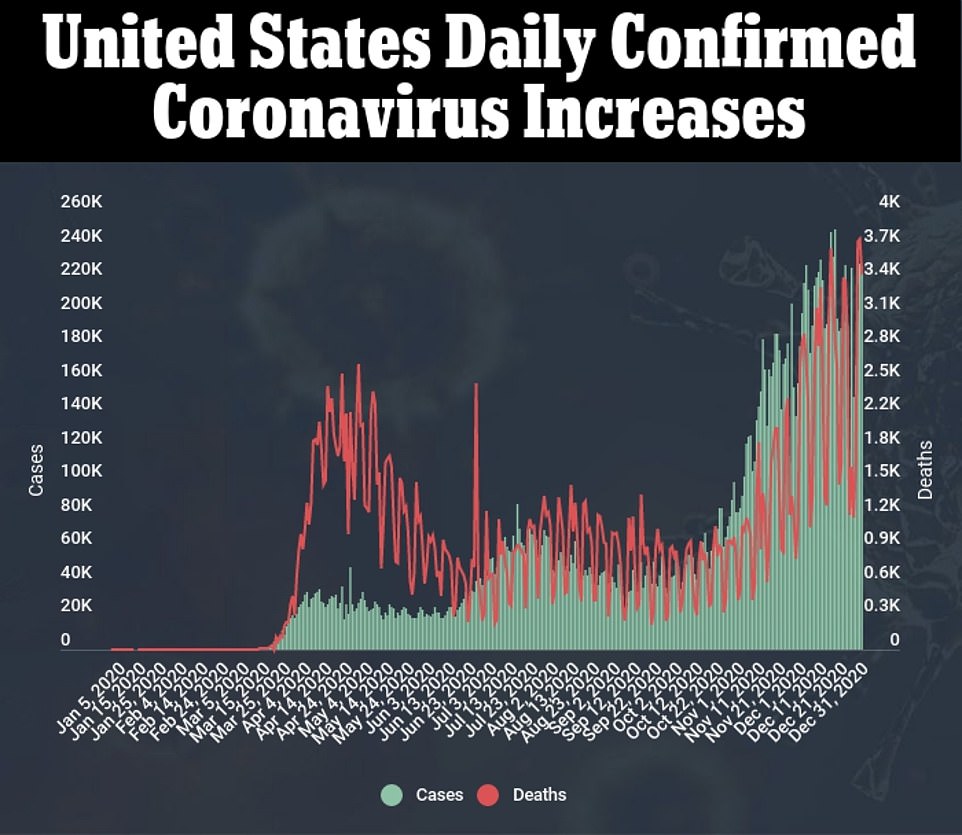 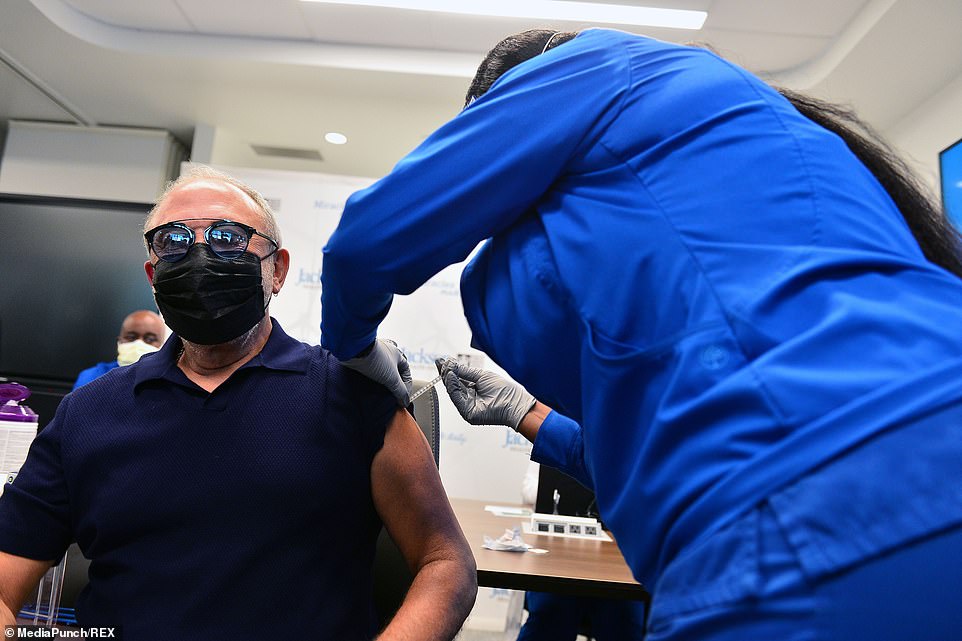 On the other hand, the worst performing states include Kansas, where just 10.6 percent of the doses delivered to the state have been administered, as well as Georgia (16.4 percent) and Oregon (18.8 percent).

New York City has administered only 88,410 doses so far, or 25.4 percent of those delivered to the city already.

The failures in vaccine rollout have been blamed on various factors, including lack of federal oversight, chaos in distribution, ‘woke’ governors setting convoluted priorities for initial distribution, and the simple lack of staff to administer jabs in overstretched healthcare systems.

Why the vaccine rollout has proceeded so slowly:

‘We would have liked to see it run smoothly and have 20 million doses into people today,’ Fauci told the Today Show on Thursday. ‘Obviously it didn’t happen and that’s disappointing. Hopefully, as you get into January the gaining of momentum will get us to the point where we want to be.’

Asked if the federal government should take over the process of administering vaccines, which is now being managed at the state level, Fauci responded: ‘rather than stepping in and taking over, I think it would be better to work with them and give them more resources.’

The federal government has said that for every dose shipped, it is holding back a second dose in reserve as well as a safety stock, which would bring the total number of vaccine doses closer to 40 million.

That plan has raised criticism, with some calling on the government to release all available doses, and rely on new production to fill the need for the required second doses.

The Pfizer vaccine requires a booster dose after 21 days to be effective, and the Moderna shoot after 28 days. Failing to deliver the required boosters could result in millions of doses effectively being wasted. 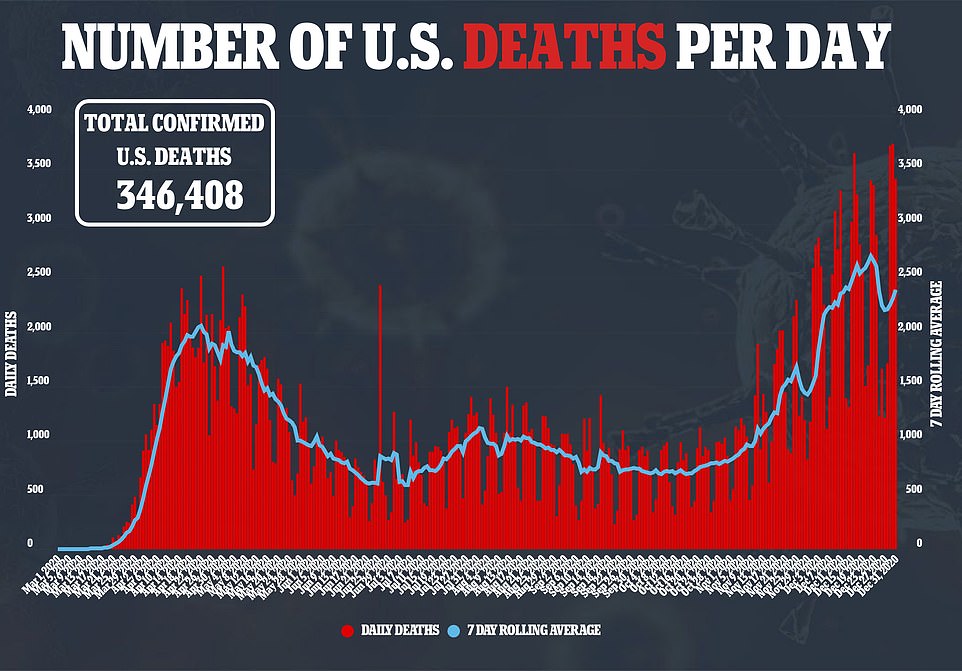 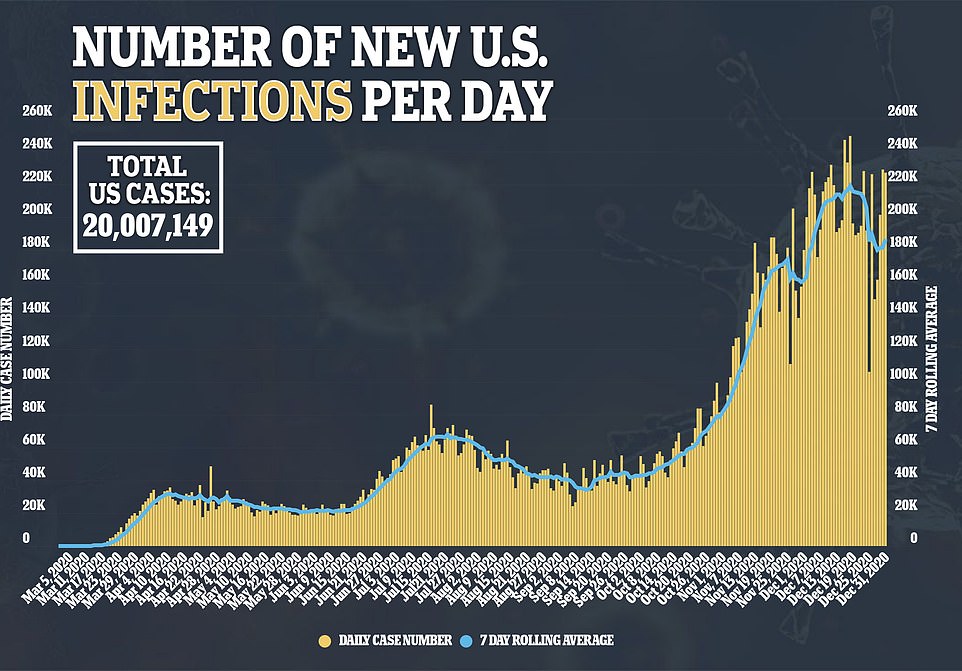 On Thursday, Fauci said that spreading out the initial doses of vaccine to more people is ‘under consideration.’

‘I still think, if done properly, you can do a single dose, reserve doses for the second dose, and still get the job done,’ he said on the Today Show, ‘but there’s a lot of discussion about whether or not you want to spread out the initial vaccination by getting more people vaccinated on the first round.’

Others point out that if states are unable to quickly administer the doses they already have available, flooding distribution channels with another 20 million doses, rather than holding them in reserve for booster shots, would make little difference.

As well, it has become increasingly clear that large numbers of healthcare workers are actually declining to take the vaccination.

In Southern California’s Riverside County, a shocking 50 percent of frontline healthcare workers have refused the vaccine, leaving public health officials scrambling to figure out how to distribute the unused doses, according to the Los Angeles Times.

A recent survey by the Kaiser Family Foundation found that 29 percent of healthcare workers were ‘vaccine hesitant,’ a figure slightly higher than the percentage of the general population, 27 percent.

The poll found the top reasons for not wanting to get vaccinated included fears about side effects, a lack of trust in the government to ensure the vaccines were safe, concerns about the role of politics in the development of the vaccines, and belief that the dangers of COVID-19 had been exaggerated.

Although clinical trials showed the Pfizer and Moderna vaccines to be safe and effective, many healthcare workers apparently feel skeptical about the speed at which they were brought to market, which was unprecedented.

Meanwhile, some governors have been criticized for setting convoluted requirements on who receives the initial rounds of vaccines.

States ultimately control distribution, but the CDC recommended that frontline healthcare workers and nursing home resident be prioritized for the initial round.

Following that, the CDC recommended frontline essential workers and those over the age of 75 take priority.

This week, New York Governor Andrew Cuomo faced criticism for prioritizing drug addicts in rehab over the elderly in the general population.

During Cuomo’s press briefing on Monday, the governor said that shots would be given to ‘priority populations’ and that when more vaccines become available the populations will be expanded and that residents of ‘OASAS’ — the state Office of Addiction Services and Supports would be next in line to receive the jab.

Adding to the concerns, millions of the doses that have already been shipped are due to expire next month. Phizer’s vaccine lasts only 30 days in the shipping freezer it is distributed in, which can also be used for on-site storage.

While it is possible to extend the vaccine’s shelf life up to six months with ultra-low-temperature freezers, supplies of the specialized freezers have been severely constrained as hospitals and pharmacies rush to snap up the limited supplies.

Once the vaccine is thawed from deep freeze, it must be used within five days or be thrown out — a requirement that has also created issues.

In Kentucky, a Walgreens in Lexington was blasted by Governor Andy Beshear for handing out vaccines to the general public, after a batch of doses that the pharmacy had thawed for nursing homes could not be distributed before they expired.

Ultimately, the key bottleneck appears to be the number staffers available to administer the jabs.

Under optimal conditions, a single nurse working a 12-hour shift could administer just 72 doses a day, assuming the nurse took no breaks and gave one shot every 10 minutes, including the time it takes to check for a history of allergies and enter the patient’s information.

To administer a million doses a day nationwide, that would require nearly 14,000 staffers working full time on vaccines — even as many health systems are stretched to the limit handling COVID patients.